Living in a Wild Garden

I arrived early at the main branch library for a seminar last night, and with those spare minutes, made a beeline for the botany section and browsed the the titles on the shelf, head slightly tilted to the left, quickly scanning the book spines for something of interest. I found this delightful little gem and snatched it up. 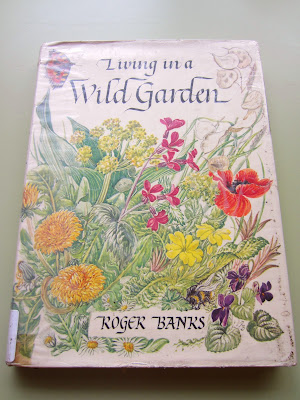 Living in a Wild Garden was written by UK author Roger Banks and published in 1980.

Opening his story he writes, "This then is the ground I wish to cover in this book, the triangle between the obvious rural charm of wild flowers, ordered cultivation in the garden, and the kitchen. Usually it is a rubbish dump but I make no apology. In an over-tidy world it is on just these waste lots, often at the city centre, that one may find something of interest, useful or good to eat."

Later he recounts how Cousin Mary turned them on to nettles. "When she said, 'We must all eat stinging nettles; we did in the war. Find me an old glove', we did and thereby crossed unknowingly in another, older, more delightful world of people who are always on the look-out for something free to eat rather than being tied by the nose to the dreary compulsion of shopping."

Ok, clearly this is a man after my own heart! 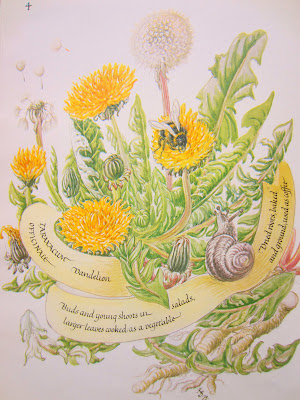 He gives a Lebanese recipe for dandelions in oil called Hindbeh.
Boil 2lbs of leaves until tender, strain and squeeze out excess moisture
Mix with 1/2 cup of oil, 1 1/2 cups of chopped onions and salt to taste and fry, stirring occasionally
Hindbeh should be served cold with lemon. 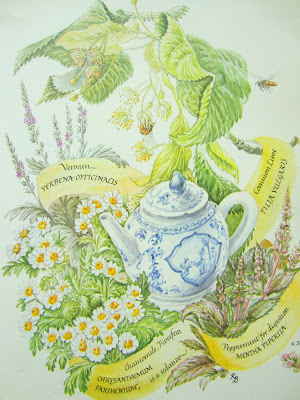 To make a tea from the lime or linden tree, "simply gather flowers dangling from low branches on their little 'aeroplane propellers' which later will whirl the seeds away on the wing...Dry them on a tray and store in a jar, using a good pinch at a time in boiling water like ordinary tea." 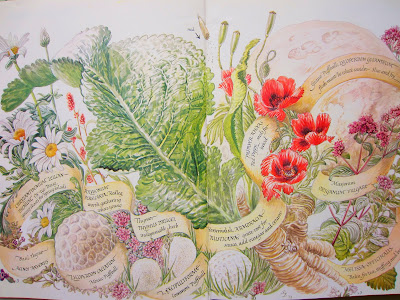 I love his description of horseradish leaves: "...the leaves of the horseradish are some of the most beautiful I know; up to two feet long, each arches from the central growth almost describing a semi-circle like a palm frond.  It is V-shaped with a tooted fringe which grows so strongly from its central rib that it develops a rhythmic undulation, all dark green with well defined veins yet, because of this serpentine growth habit, the light can be seen alternately to shine through it and be reflected from it in the most subtle way." 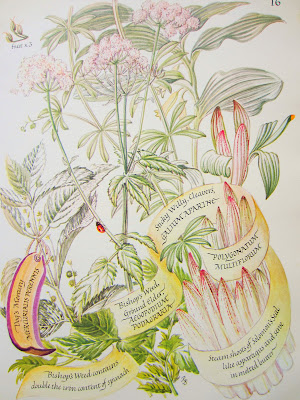 Roger gives a fascinating account of Bishop's Weed, or Goutweed (Aegopodium podagraria).  Often despised by gardeners for its aggressive spreading nature, he reminds us that this is an ancient food plant, having been discovered in the stomach of the Tollund Man, who lived in the 4th century BC.  I gather it every year, dry it and include it my herb salts. 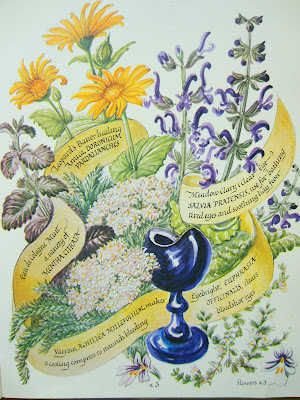 He includes a number of medicinal plants and their uses in the book. 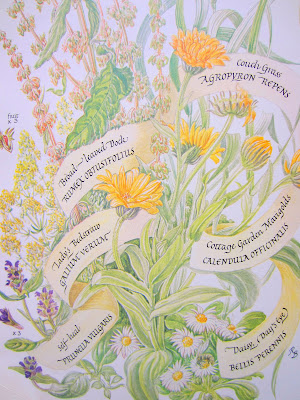 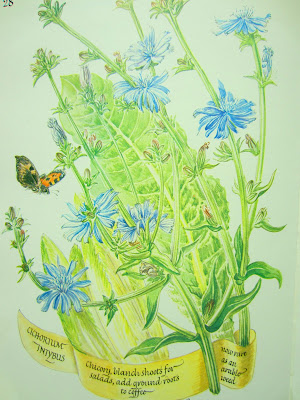 I love this drawing of chicory.  All of the artwork in the book is a joy to look at. The writing style is warm, inviting and humorous. I'm glad I stumbled upon the book and look forward to making my way through it in the next few weeks, while I dream about living in my own wild garden!

In 2008 I didn't buy anything new for the whole year. Food and basic toiletries (but not toilet paper) were the obvious exceptions (twice I broke my own rule). Used items were allowed, but I tried really hard to reduce consumption as much as possible.

I finished my year successfully, and along the way learned a lot about how much the world consumes, the waste we produce, sustainability, voluntary simplicity, climate change, peak oil, resource depletion, the water crisis, the food crisis, voting with your dollar, voting with your fork....

With the help of the Awesomedudeguy (ADG), I'm continuing my exploration of living lightly and frugally, while increasing my self-sufficiency and resiliency, staying debt free, and preparing for a climate changed, resource depleted world, in uncertain economic times.

My nothing new restriction is lifted, but I continue to be a gentle, local consumer as much as possible.

My hope is that some of the information and resources I post about here will be helpful to others. Thanks so much for stopping by !

Yours in unstuffing,
Amber

"Forgive me if I never visit. I am from the fields, you know, and while quite at home with dandelion, make a sorry figure for the drawing room" ~Emily Dickinson

"I never had any other desire so strong, and so like covetousness, as that.... I might be master at last of a small house and a large garden, with very moderate conveniences joined to them, and there dedicate the remainder of my life to the culture of them and the study of nature." ~Abraham Cowley

"The laws of nature are under no obligation to cater to our culture’s emotionally charged fantasies of perpetual progress and limitless growth." ~John Michael Greer

"The universal conspiracy of the silent-assertion lie is hard at work always and everywhere, and always in the interest of a stupidity or a sham, never in the interest of a thing fine or respectable. Is it the most timid and shabby of all lies? It seems to have the look of it. For ages and ages it has mutely laboured in the interest of despotisms and aristocracies and chattel slaveries, and military slaveries, and religious slaveries, and has kept them alive; keeps them alive yet, here and there and yonder, all about the globe; and will go on keeping them alive until the silent-assertion lie retires from business--the silent assertion that nothing is going on which fair and intelligent men and women are aware of and are engaged by their duty to try to stop." ~Mark Twain

"It is not enough simply to abstain from theft...We must remember that nothing in this world really belongs to us. At best, we are merely borrowers. It is our duty, therefore, to borrow no more from the world than we absolutely need, and to make full and proper use of it. Taking more than we need, and wasting it, is a form of stealing from the rest of humankind."
~Commentary on Sutra 30 The Yoga Aphorisms of Patanjali 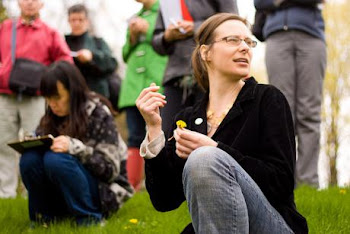 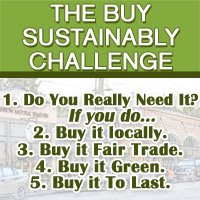